A Brief History Of Ribbons

Some of the following information has been sourced from Wikipedia, The Free Cambridge Dictionary, and other sources of publicly available reference information, however we feel it only right to mention and credit them.

The Free Cambridge Dictionary definition of a ribbon reads as:

We would add that the material is typically made from cloth, however over recent years there has been a trend to use polyester, nylon and metal threads.

Where does the Word Ribbon Come From

Along with trimming, braids and elastics, the manufacture of ribbons even today remains a specailist area of textile manufacture. Ribbon looms are similar to cloth textile looms however they tend to be a lot narrower and taller . The looms weave two or more webs simultaneously, this may increase in the modern looms to as many as 40 narrow fabrics at a time! To enable all the actions of the loom to take place and all the shuttles to be thrown a power loom is required. This technology dates back to around the 16th century, as there is mention of looms that could weave several narrow webs at the same time being used in Danzig. When looms were being used in Leiden in 1620 there was much discontent caused which gave rise to rioting by the local weavers, so much so that the state had to ban the use of the loom. This ban was up held for a considerable period of time.

Around 1675 the loom was brought to London and was known as the Dutch Loom or Engine Loom, although its arrival did cause a disturbance , the machine was not banned as it had been in Danzig. Around 1745 a patent for improvements to the ribbon loom was granted to John Kay and Joseph Stell. Since then the ribbon loom has benefited from general improvements that have been made to General Weaving looms and that have been applied to both.

In France the centre of the ribbon industry is based in St Etienne where there are records that suggest that weaving ribbon has been going on since the 11th century. Meanwhile the ribbon weaving industry in the UK Seems to have focused itself on the areas around Norfolk & Coventry.

Over the years the ribbon styles and materials used have changed in popularity, in today’s market most of the ribbons are made from various polyesters and nylons instead of natural materials. The garment and underwear trades both use large volumes of satin ribbons, as a result it still remains the top selling polyester ribbon.

The end of the 1980’s & 1990’s saw a big growth in the clothing industry. As a result a lot of development was put into ribbon weaving to enable the industry to meet the increased demand for new product developments and increased volumes.

As a direct result of this boom we are today left with a ribbon industry which is capable of making an extremely wide range of products both woven and printed at extremely affordable prices. This has meant that ribbons are today – more so than before – being used for a much wider range of uses. Whilst the garment industry still accounts for a lot of the ribbons produced today, there are still millions of metres of ribbon production aimed at the gift market, cake and florist industries, stationery and marketing industries and many more diverse industry sectors. 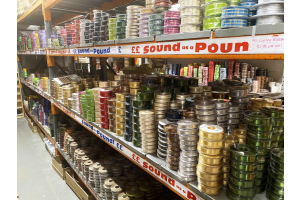 Preview Of Some Of Our Latest Sale Ribbons 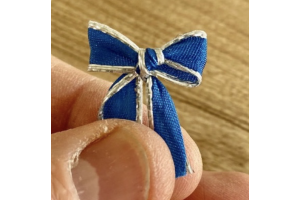 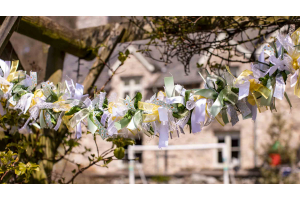